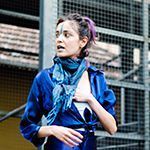 Semy Monastier is a performer, theatre director, dancer and light designer. Is co-founder artist and manager of Casa Selvática, where she has been developing most of her works since 2012.

In 2013 she developed some works in a partnership with Exchange Dublin and with the irish artist Kevin Sharkey. She acted on the shortfall Only The Lonely directed by Tamim Jamshed and the dance video Turning created by Eoin Heaney and Nora Windeck.

Her research has influence of the literature, mostly written by woman, pop culture, and unconventional lighting sources.

She loves cats and is member of a NGO, Crazy Cat Gang.