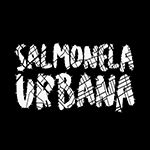 Salmonella Urbana Cia Performática is an artivist collective which integrates artists of different languages. On the border between art and life, the collective has been working on performances, urban interventions and actions shared with many communities. “What do you want to support?” (2014); “In Movimento: Intercorpus and Interdistricts” (2014); “Military Intervention Now!?” (2014-2015). From April 2015 to April 2016, it carried out the project “April 29 – to never forget”. “Heart of Darkness: A Mythic Journey Civilized by the Civic Center” (2015), “Washing the Pans in Banana Republic” (2016). “The banquet of PEC” (2016). it’s been part of Grude Circuit since 2016. In August 2015, it joined the extension project “Practices and processes of performances and interventions in various spaces” coordinated by Lúcia Helena Martins, professor at the UNESPAR - FAP Paraná School of Arts, composed by the group members and the participants of the course. The group conducted weekly action investigations in various locations in the city of Curitiba, from 2015 to 2018. “Not seeing fires” (2018); “FROM / TO: letters from unemployed to busy residents of an invaded country” (2018). “From / To: constellations occupied by affections in a cold city that resists” (2018-2019).