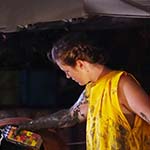 An Independent artist and dancer, lives and works in Tel-Aviv. Studied at the Haifa dance training workshop for contemporary dance. Graduate of the movement and choreography Department at the Jerusalem Academy for music and dance. Currently taking part in the new program for choreographers in "Kelim" center, Bat-Yam.

Choreographer and performer of ‘Details of a Swing Phase’ as part of the International dance week of the Machol Shalem Dance House (2013). Presented the solo "Asufa" (gathered) at the "Room Dance Festival" (2015). Established and member of "Hallux Vallgus" a movement improvisation collective at "Barbur" Gallery, Jerusalem (2014-2015). Participated as a performer in "Ask for water, gives him Milk" by Tal Eliezer Rosen (Hansen House 2017).

Since 2016 is an Ensemble member and performer of the Performance art platform "Bamat meitzag – Miklat 209" in Tel Aviv and performed in "Shulchan Aruch" and "Hineni u Mihu?" directed by Tamar Raban and Ernesto Levy.