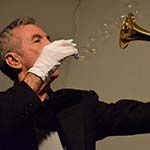 Born in Belgrade in 1948, Alex Hamburger came to Brazil at the age of 6, with his parents. His endeavours in the art field started around 1973, after he gave up a career as an economist. Particularly concerned with the symbiotic possibilities of different modes of expression, he developed cross-disciplinary works of Visual and Sound Poetry, Object-Poems, Artist Books, Book-Objects, Performance art, “Anti-art” works etc.

From the seventies, extensive trips abroad, with few long stays in Paris, London and New York, gave him the opportunity to connect with many other artists including Dick Higgins, Alison Knowles and Richard Kostelanetz from the Fluxus group, thus expanding his researches in new theoretical directions.

In the last 20 years, he has worked extensively, in his adoptive hometown of Rio de Janeiro and abroad, to help the understanding of this other languages. He has had several solo & group shows, more than 40 performance art pieces, 6 published books of experimental poetry, and several published sound pieces.