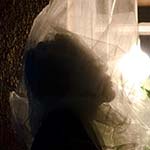 Límerson was born in Bauru, in the interior of São Paulo. Graduated as Theater Director in 2011 by UNESPAR, in Curitiba. In this city he did his main works, involving performances, writing and dance-theater, in addition to the creation of Núcleo de Espetacularidades. His poetic texts were published in Revista Canguru, Contratiempo, among others, besides being the author of Invaginação em Pálpebra. Límerson dances his own writing, and enacts his own listening, transiting between the humor and the numinous, through alchemical processes of immersion in semiotics. He is currently post-graduating in Language, Culture and Media from UNESP - Bauru, a city where he continues to perform his own writing.