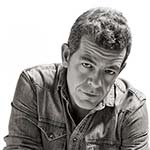 Cleverson Oliveira draws on multidisciplinary fields an visual language that explores the limits of the image varying from the experience of cinema to drawing.
Cleverson’s latest series of works are drawings made on paper and canvas. Using the simplicity of material as graphite powder, pencil and permanent marker, the artist creates an very intricated process of image making.
Demystifying the apparent natural condition of landscape, the works construct an imaginary space where the artifice of representation becomes the visual field after a complete disfiguration of representation. The landscapes seem to be set before us as an inevitability of nature. Built for centuries as the equivalent of nature, landscapes take on the most perfect representation of the world.

Cleverson Oliveira was born in Curitiba, where He received his BFA(sculpture) at Escola de Musica e Belas Artes do Paraná. In 1996 he studied Art History at New York University, in New York, where He lived from 1996 to 2008. Lives and works in Piraquara, near Curitiba, Brazil. Cleverson participaded in various art exhibitions including venues like New York, Curitiba, São Paulo, Rio de Janeiro, Seoul, and Doha.